This is what happens in a minute on the internet

During an average workday, a single minute might seem negligible.

If you’re lucky, a minute might buy you enough time to write a quick email, grab a coffee from the lunchroom, or make small talk with a coworker.

But in other situations, a minute can also be quite extraordinary. Imagine being a quarterback in the Superbowl in overtime, or finding yourself in a life-and-death situation in which every second counts towards the outcome.

When it comes to gauging the epic scale of the internet, it would seem that each minute leans closer to the extraordinary side of the spectrum.

Today’s infographic from @LoriLewis and @OfficiallyChadd aggregates the online activity of billions of people globally, to see what an internet minute looks like. 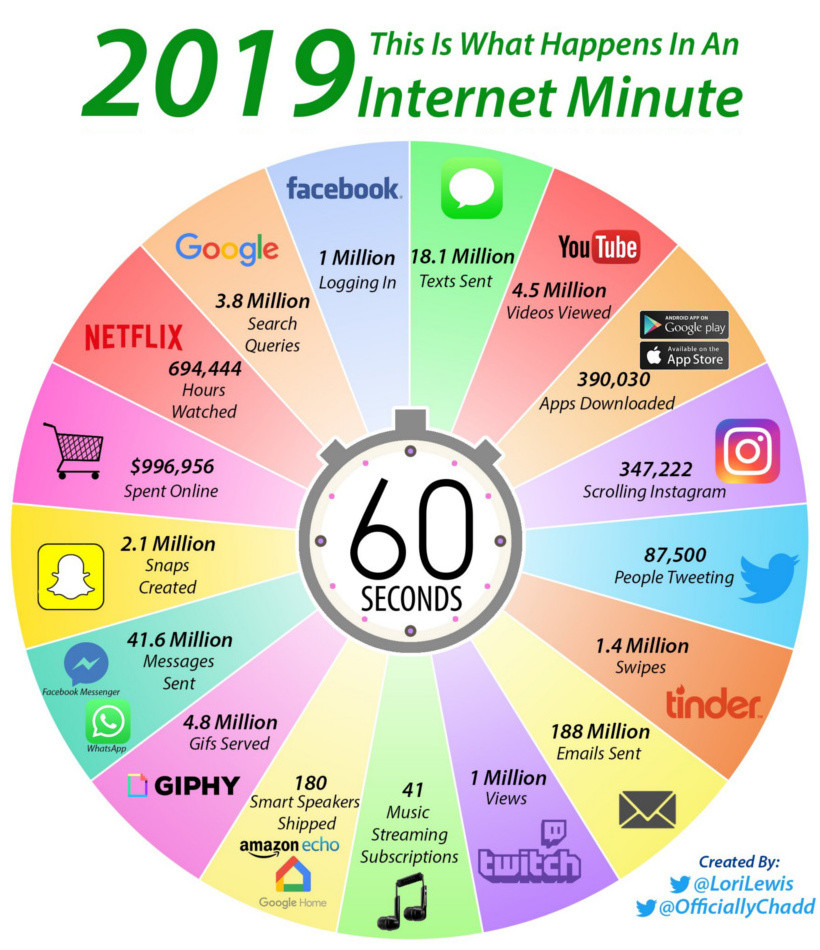 How is it possible that 188 millions of emails are sent every minute? How does Google process 3.8 million search queries in such a short span of time?

Simply put, the number of actions packed into just 60 seconds is extraordinary.

The internet is incredibly dynamic, which means there are always new and interesting segments that are emerging out of the internet’s ether.

To get a sense of this, take a look at the comparison of last year’s version of this graphic with the more recent entry:

Platforms such as Instagram and Netflix continue to grow at a blistering pace, while new categories such as smart speakers are quickly building a strong foundation for the future.

Last year, for example, only 67 voice-first devices were being shipped per minute – and in 2019, there are now 180 smart speakers being shipped in the same window of time.

Interestingly, even as more and more people gain access to the internet around the world each year, there are still parts of the web that are plateauing or even shrinking in size.

You’ll see that Facebook logins and Google searches both increased only incrementally from last year. Further, the amount of emails getting sent is also quite stagnant, likely thanks to to the rise of workplace collaboration tools such as Slack.

Snapchat is another story altogether. In the last year, the app saw a decrease in millions of users due to the infamous design that helped torpedo the app’s rising popularity.

Regardless, we’re certain that by this time next year, an internet minute will have changed significantly yet again!